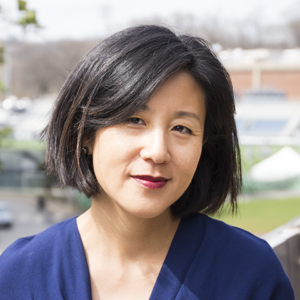 Dr. Christine Kim is an Associate Professor of Teaching in the Asian Studies Program of the School of Foreign Service. She teaches modern Korean history and other topics in East Asian history. She has a doctorate in History and East Asian languages from Harvard University, a master’s degree in International Affairs from Columbia University, and an undergraduate degree in Chinese from the University of Virginia (Wahoowa!).

Christine serves on the SFS School Council and represents the Asian Studies Program at the Main Campus Executive Faculty; she is also a member of the MASIA admissions committee, so there’s a good chance that she read your application file!

What courses do you teach? What are the central questions or themes that structure your courses?

My research and teaching have focused on Korean nationalism, social change, material culture, and cultural heritage. For MASIA, I have taught courses on Korean history—approached both through academic writing (ASST 504) or film (INAF 421)—as well as comparative East Asian history courses that focus on imperialism and colonialism (ASST 509, ASST 440/HIST 421), and monuments and tourism (HIST 521/ASST 554).

My Fall 2021 Korean film course (INAF 421) is under-enrolled and I would love to get a cohort of MASIA students interested. This is a course on modern Korean history, from the late Chosŏn to the present, that is introduced through the medium of film. Each week we will use films that depict a significant event or social history—Chosŏn during the Manchu invasions, family lineage, Koreans mobilized to fight for the Japanese empire, South Koreans living under military dictatorship—to think about how Korean think about their own past and present.

What are your research interests? What projects are you currently working on?

I have a long-simmering research project that focuses on Korea under Japanese rule in the early twentieth century, which examines the far-reaching impact of colonialism on Korea’s monarchical institution. I take a well-known event in history, Japan’s annexation of Korea, and look at what happened to Chosŏn’s dynastic identity—court rituals and institutions, patronage system, privileged few and the masses—as a way of understanding the dynamics of colonial rule and the changing nature of polity. I have also written about Korean cultural patrimony, specifically how objects of antiquity evolved from being viewed as collector items belonging to the privileged few to representing the Korean people or nation.