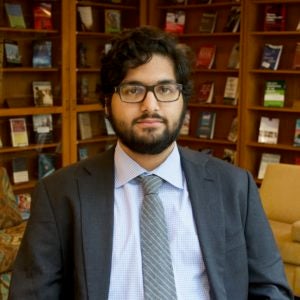 Moez Hayat is a second-year Master of Arts in Asian Studies student pursuing a certificate in Diplomatic Studies. While in MASIA, Moez pursued an internship as a Student Pathways Intern with the U.S. Department of State in the Bureau of East Asian and Pacific Affairs, Office of Maritime Southeast Asia, where he supported bilateral American policy initiatives toward Malaysia, Indonesia, Brunei, Philippines, Singapore, and East Timor. He also worked as a Research Assistant to Ambassador Touqir Hussain researching and editing Amb. Hussain’s forthcoming book on U.S.-Pakistan relations. In addition to his academic pursuits, Moez serves as the MASIA representative to the Georgetown University Graduate Student Government, and as a member of the MASIA Task Force on Diversity and Inclusion. He studies Hindi and Urdu languages and is a 2019 graduate of the Bachelor of Science in Foreign Service program at Georgetown University.

What led you to pursue a graduate degree focused on Asian Studies at SFS?

Coming from a Middle Eastern studies background, I was drawn to Asia as the home of the more than 45% of the world’s Muslims, residing in a series of vibrant, diverse societies and dynamic economies. Uniquely, MASIA provided me a chance to study the interconnection between East Asia and its sub-regions, South and Southeast Asia, from both a socio-cultural and a hard policy perspective. This has allowed me to understand the goals, aspirations, and interests of these nations, and their role in an emerging great power competition between the U.S. and China.

What has been your favorite class that you have taken while at MASIA?

My favorite class was Professor Diana Kim’s seminar on Illicit Economies in Asia. Few classes are able to combine a rigorous use of theory with an equally rigorous commitment to statistical methods and historical analysis as to understand the unquantifiable–the illicit trade in money, goods, and people across borders in Asia. Professor Kim brings this interdisciplinary framework together in order to deconstruct the nature of economics, law, and statecraft in Asia. This is a class that I continue to reference in both my academic research and policy work.

What are you most looking forward to this semester?

I am looking forward to completing my final research papers on economic policy and citizenship in Southeast Asia. After that, I can’t wait for my seasonal re-watch of Sound of Music and to record my reflections from the semester on my Smith Corona Coronet electric typewriter.

What do you hope to do with your degree once you graduate?

I hope to continue my academic research on South and Southeast Asia, and to ultimately obtain a position where I can better inform American policy towards these important societies.